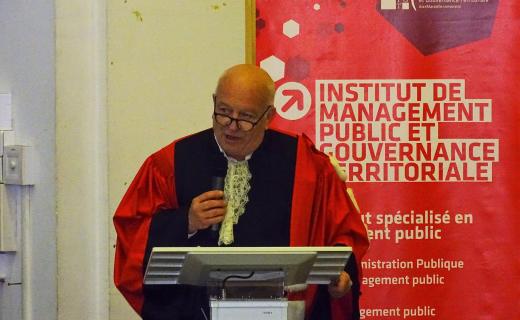 The founder of the IMPGT, Professor Robert Fouchet, left us this Thursday, April 28, 2022.

From the creation of the IUP in 1996 with Jean-Rodolphe Lopez and Jacques Bourdon to the birth of the U.F.R in 2004, Mr. Fouchet was the director of the IMPGT, a component of Aix-Marseille University, until 2012.

During all these years, and still today, he has kept the figure of the founder, the pillar and the visionary. As he liked to remind us, there were few, at the end of the 1990s, who dared to bring together "management and public" and to have the idea of making it a Training and Research Unit which will become a component of Aix-Marseille University at the time of the merger in 2012.Professor emeritus since 2018, he advised the Presidency of the University on his lifelong passion, culture, which he also cultivated in the Marseille Concerts association, which was so close to his heart.

For all those who knew him during the 49 years he spent in the University, Mr. Fouchet was much more than a colleague. We will never forget the Mediterranean warmth he exuded.

Our thoughts and deepest condolences go out to his family and friends.